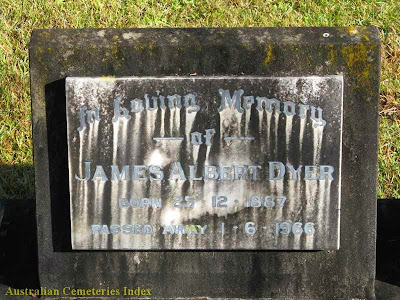 Happy 125th Birthday In Heaven to my Great Grandfather, James Albert Dyer!
I’ll be coming to visit you in Bowraville Cemetery for the first time in approximately 2 weeks. 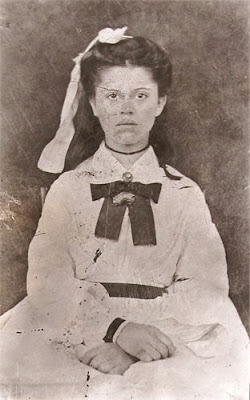 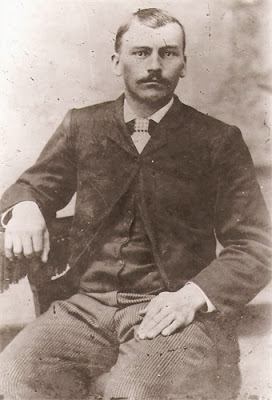 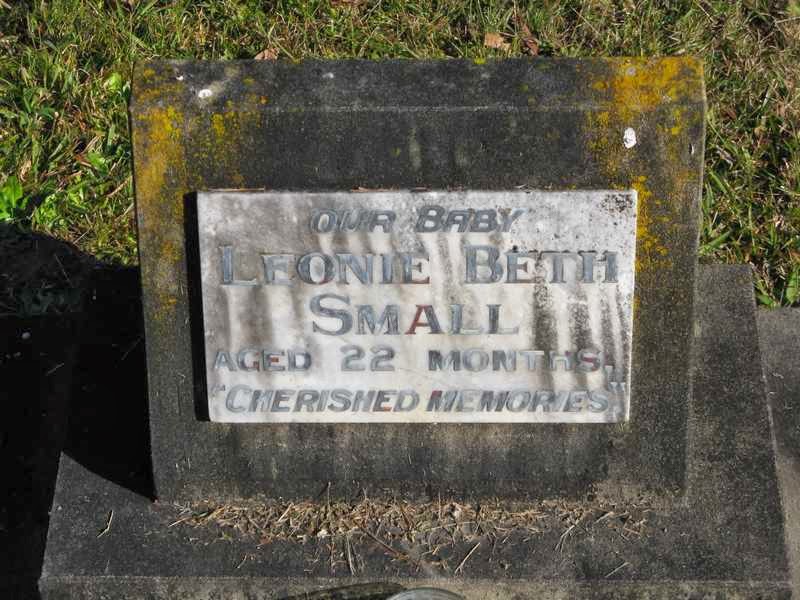 I just received your letter this morning & always glad to hear from you. You have got the paper of your fruit you think it might have had a better it was a mistake of me but I did not see it till I saw it in the paper & I could not help it then. In deed I was so bad of myself if Uncel [Uncle] Peter had not come. I dowt [doubt] you would not seen in the paper at all you think I might kept more to my self. I was so proud of you sending them that I could not hide your thoughtfulness of sending them so far to me I will be more so if you will send me some of your Oranges & I will know better if they are good or not. You saw I did not say if they were good you know heat corn is never good. They were very pretty to look at did you get the letter that they were corn & more as the young Sadie that wrote it was so kind to me. You have sent me Robert [William’s brother] address but I think you are making a card(?) of me now when you put Esquire to it. I will send his papers to you until I hear from you again & you can send them to him. Will he be far from where he was? Missie is gone to Kinross her address is Hygh St Kinross. I sent your address to Jeannie [William’s sister] long a go but everyone is so much taken up with themselves they have not much time to think of others at least it appears so. I had a letter from John [William’s brother] a long with yours this morning. He is thinking of coming for some days only if he can get away. You might come & join his company the days he will be here. I hope this will find you will & free of toothache. I am better than I have been for a long time so I will draw to close.

I remain your affectionate mother

There was a significant lack of punctuation in the letter so I inserted full stops where I thought appropriate.

What were the main points I got from this letter?

The 15th of December.

I was unable to post this yesterday because I was travelling.

Yesterday, the 15th of December 2012, was one year since my Great Uncle Curly died. He was an amazing man with a wide variety of interests - growing huge vegetables, inventing cleaning products & bee-keeping to name a few. He worked right up until the day he died. Funnily enough, the 15th of December 2012, marks four years since my Great Uncle Noel died. He was Uncle Curly’s younger brother. I didn’t know Uncle Noel, but I know he was a great man. I’m hopefully going to meet his wife soon. Uncle Curly & Uncle Noel were my Nannas' younger brothers.

They died on the same day, 3 years apart.

She was born in 1843 in Scotland. In 1869, she married my Great Great Grandfather David Croal in Edinburgh. They arrived in Sydney, Australia with their 3 children in 1883. She died on the 31st of August 1909 and was buried the next day. She is buried in Rookwood Cemetery, Sydney with her grandson Adam Gow (1905 - 1905). 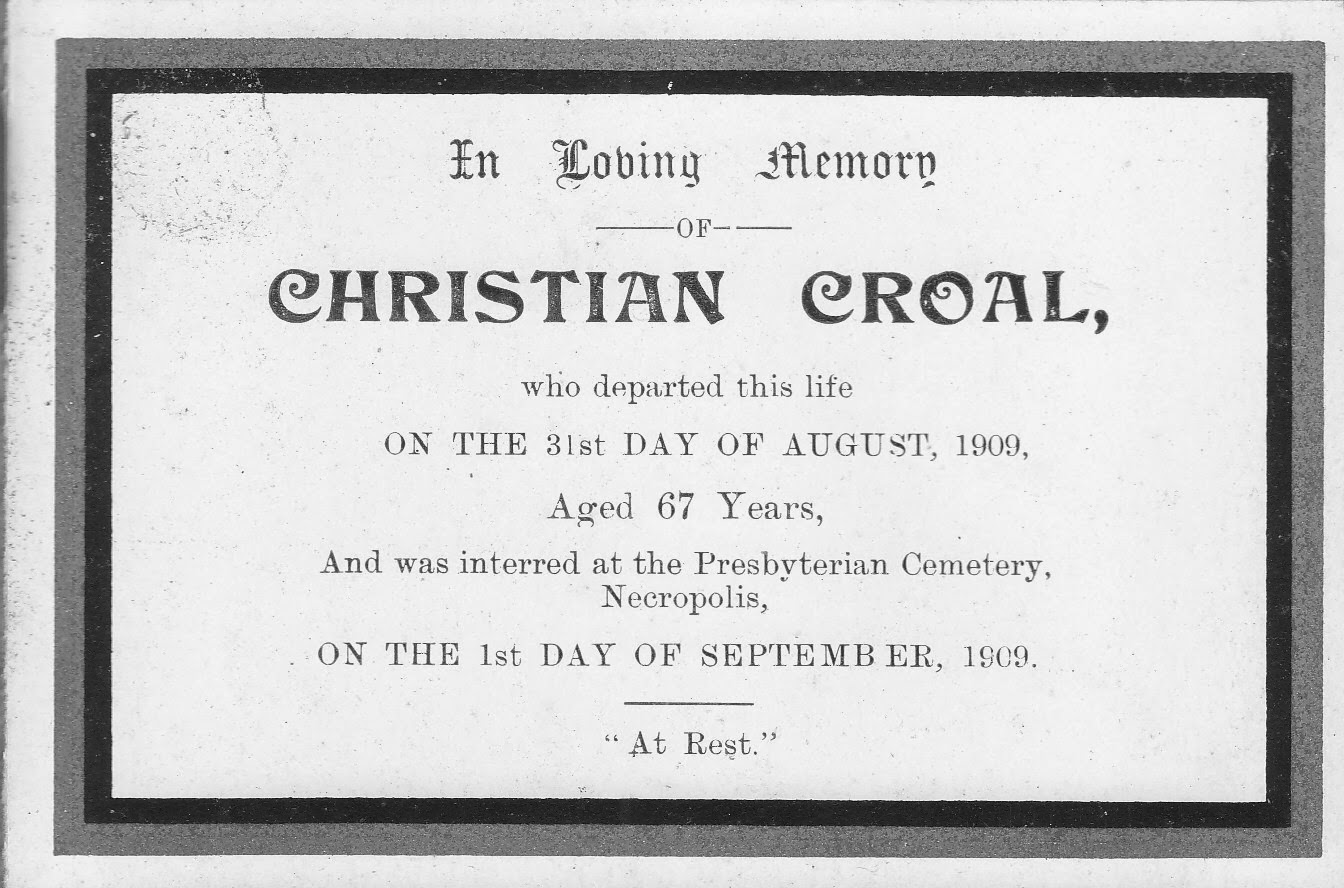 This is my Grandmother’s gorgeous vase. She died in 1980, 10 years before I was born, so I never knew her. She was very much into genealogy, one reason being that she was adopted. She passed down her love for genealogy to my Aunt & Uncle. My Mum didn’t catch the “gene bug” which we call it in our family. It skipped her, and I caught it instead. My Aunt gave me my Grandmother’s vase in 2009. When I have children, I will pass it down to them…and hopefully they will catch the “gene bug” too! When my Grandmother died, her children (my mum, aunt & uncle) were not able to have much of her things, so this is very special, especially since my love for genealogy comes from her. <3 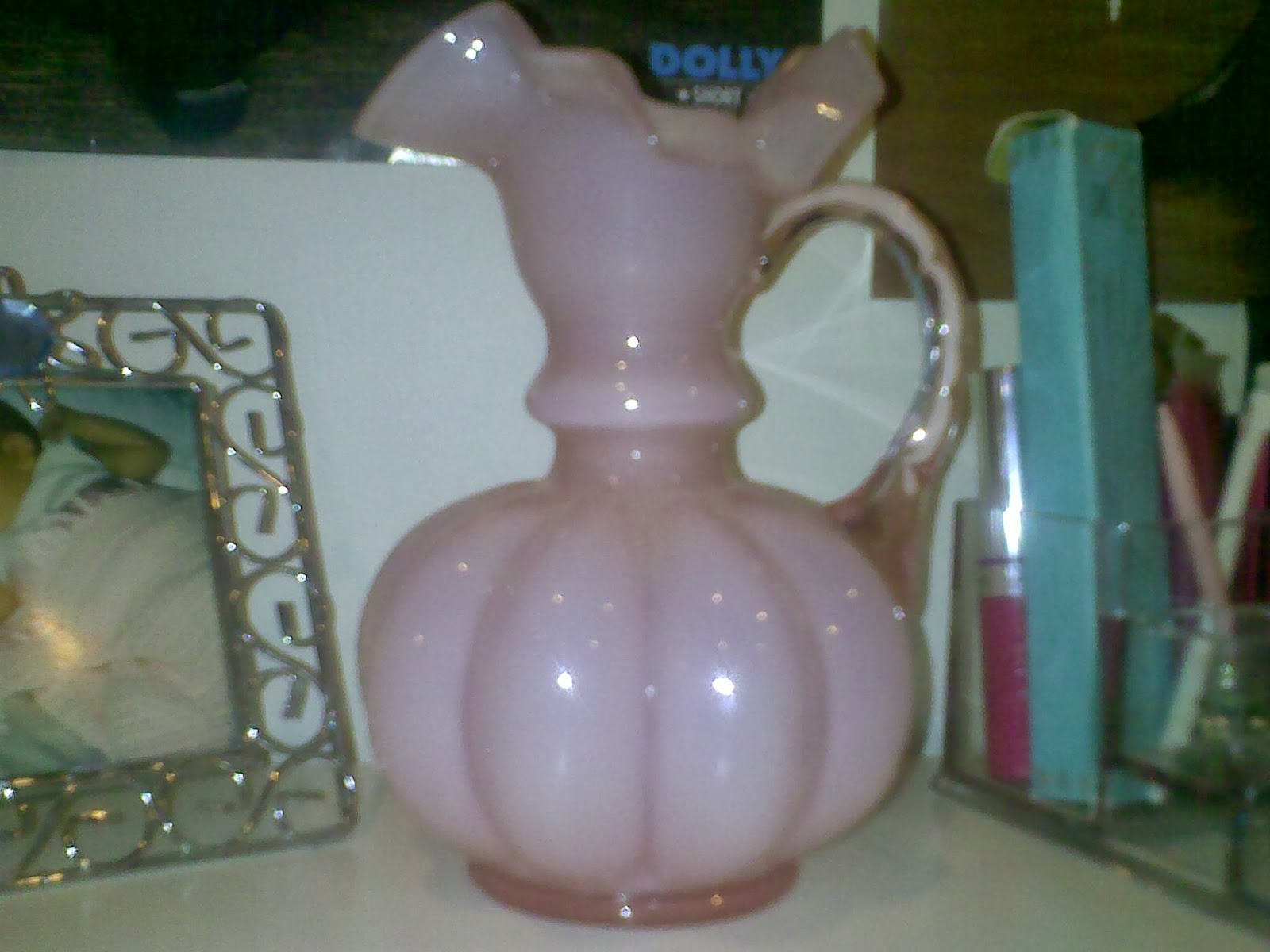 Happy 150th Birthday to Newtown, Sydney, where my Great Great Grandparents David Croal & Christian Alves lived from 1890 - 1904. The first photo, is them standing in front of their house in 1891/1892. After David died in 1893, Christian remained in the house until 1904. She moved in with her daughter and son-in-law, my great grandparents, Elizabeth Croal & William Gow, until her death in 1909. William & Elizabeth lived in Stanmore, one of the neighboring suburbs.

The second photo is the same house, taken in 1993. 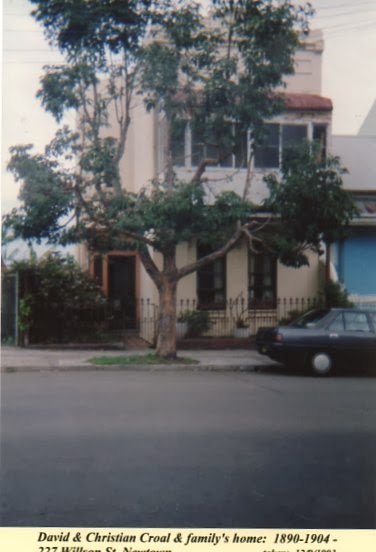 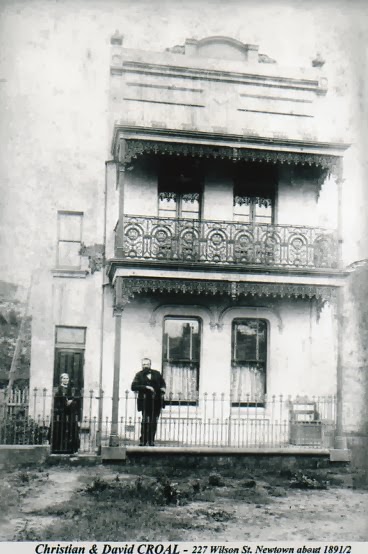 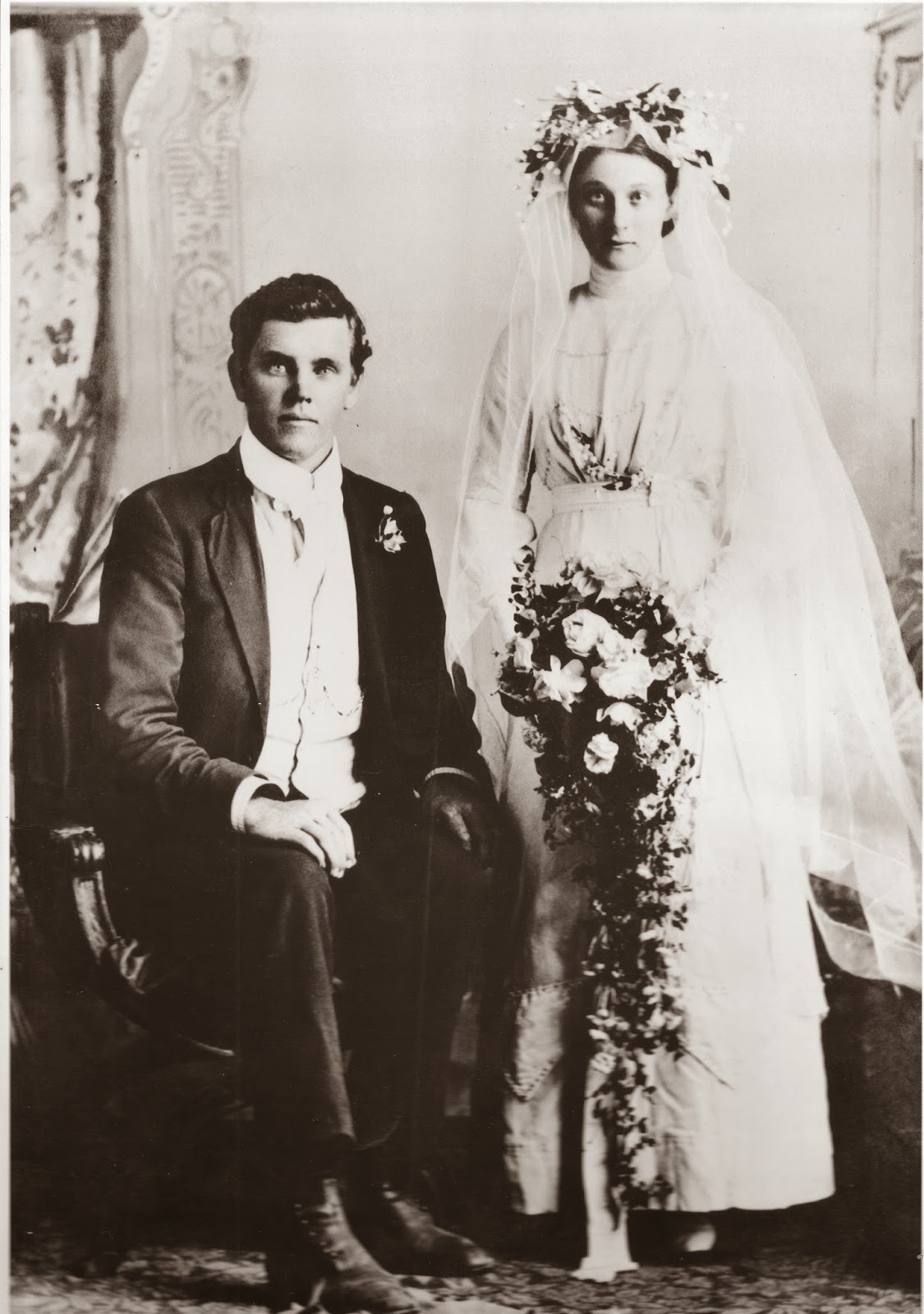 Happy 80th Birthday in Heaven Grandma! You were taken away from us too soon. I know you’re looking down on me from heaven, and I know you’re proud of me for all that I’ve done so far with my genealogy. I wish I could show you and tell you everything I’ve found. You’d be amazed :) I wish I could have known you. I love you! 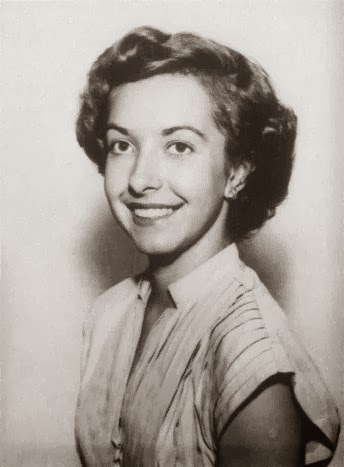 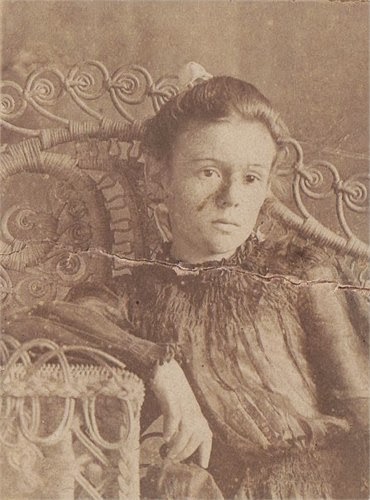 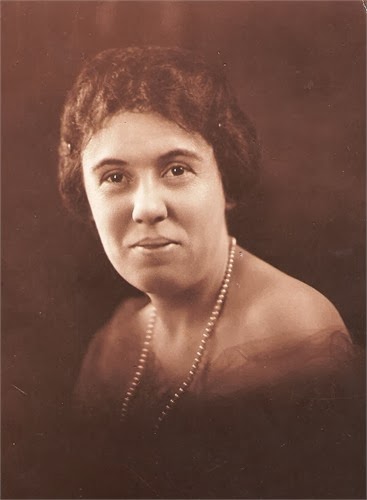