Janet Mackay, Is It You?

This past week, I have been researching the descendants of my 4x Great Uncle Hugh McKenzie Mackay. His son Angus (1857 NSW - 1929 QLD) had 2 marriages and 16 children. Angus' 3rd child, Janet Mackay, according to the baptism record, was born in New South Wales in 1887 to his first wife Jane. I had a number of leafy green hints for Janet which I had a look at.

This led me to another tree that had Janet listed with two marriages - Richard Daley in 1911 and Harry Walters in 1945. But hang on a minute, I had just read her sister Sarah's obituary on Trove. Sarah had died in 1938 before she was 50, and I was hoping Trove would provide me with some clues as to why. I got more than that though - Sarah's obituary wonderfully listed all her siblings! Her sisters first names AND married names were given.

Can you see Janet's name in the list of Sarah's siblings?

On the New South Wales Births Deaths and Marriages Index, the only marriage for a Janet Mackay & male Geelan is to a James Samuel Geelan in 1936, Taree (#3184/1936).

James passed away in 1947 – there’s an inquest and everything! And yep, his wife Janet is mentioned.

If you are interested, here is a link to an article detailing the inquest - it is very long!
http://nla.gov.au/nla.news-article168523959

But what about this other tree?

Well, I checked it out and they are not a direct descendant of Janet, but of a sibling of Angus' first wife Jane. I guess this is another case of not believing in other public trees on Ancestry until you have done your own research. I would not want someone else coming along and taking the information from my tree to be 100% correct. We all make mistakes.

So, will this death certificate tell me what I want to know? Is this Janet Geelan the Janet Mackay I am looking for?

Time to play the waiting game.

Do you have shares in companies? I do not yet, but my Dad has been talking about setting me up with some shares. My Great Grandfather William Gow had shares in the North Central Broken Hill Silver Mining Company. Try saying that really fast 5 times in a row!

Finance and shares are not my forte at all. My understanding from this form is that on the 20th of December, 1895, William bought 50 shares in the company. If you look at the top of the form, you will see "dissolved in 1939" written. My Grandfather wrote that when, I assume, he was doing his own research.

I jumped on Trove to have a look at what information there was about the North Central Broken Hill Silver Mining Company.

A month before William bought his shares, the company had them available for three pence per share.


Fast forward to 1939, and the company is in liquidation.

I would hope that the company going into liquidation did not affect William that much. Did he even still have shares in the company in 1939? Who knows.


Did your ancestors have any shares?

A new year. A new set of goals.

Every January I ask myself the following question - Which ancestors am I going to research this year? I reflect on the ancestors I researched the previous year, and those I wanted to research but did not get around to.

When I see people post their Ancestor Counts, I always think about doing one, but then I never do. It was Michael Dyer's Ancestor Tally last week that got myself into gear. If you would like further instructions on how to create your own Ancestor Count, Deidre from Twisted Twigs On Gnarled Branches Genealogy has a great how-to. Alona Tester's Ancestor Count has just popped up in my news feed too.

What is my current Ancestor Count? Well, I did two. My Maternal Grandmother was adopted, so one includes her adoptive ancestors, and the other her biological ancestors. You will be able to tell which one I know more about.

You can see that once I hit the 7th generation - 4x Great Grandparents - the trouble begins. I do have names for a number of people in the 9th and 10th generations, but I have not proven them yet, so I chose to leave them out.

For most of 2016, I was working on the descendants of my ancestors' siblings. I was working my way forward as much as possible. In 2017, it is time to go back to the past. Hopefully, when I do my next Ancestor Count in 2018, the numbers will have increased.
Posted by Caitie G at 16:44 6 comments:

Mum's Collection of Badges from the USA

This morning, while thinking about what to do for my next blog post, my Mum brought out her collection of badges. You might remember last year I shared photos of my Great Grandfather's police badges. Well, these are a different kind. I had not seen these before either - where have you been hiding them Mum?! These badges are of a political nature - Presidents, people running for President, and the Equal Rights Amendment (ERA). I have decided to show you them because I think they are interesting, and I think it is neat that my Mum has kept them. They are a part of history. My knowledge of American Presidents is not that great, so this was an education lesson for me as well when Mum was explaining who was who. I had not even heard of the Equal Rights Amendment either!

Please keep in mind that these are old badges. Some of the badges belong to my Mum, some were given to her, and some belonged to my Grandma. They do not reflect current politics in any way. As I said before, I just think it is pretty cool that Mum has these, and I will definitely be keeping them for future generations. I don't even have any badges representing Australian Politics/Prime Ministers! 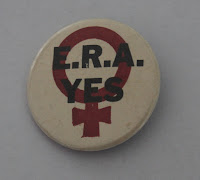 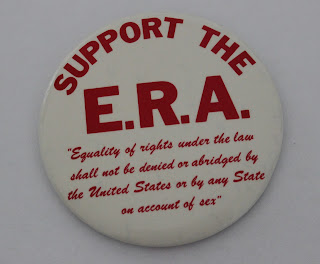 And finally, Rice University (Houston, Texas). Why does Mum have this badge? She went there! 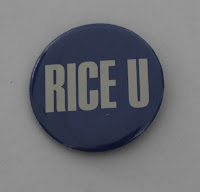 Does your family have any badges or other political memorabilia?