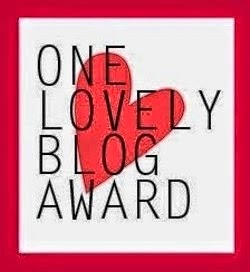 The One Lovely Blog Award has been going around the blogosphere in recent weeks. This morning to my surprise, I discovered that I had received this oh so lovely award from Shauna Hicks of SHHE Genie Rambles & Diary of an Australian Genealogist. Shauna is the sole co-ordinator of National Family History Month in Australia and New Zealand, and she does this voluntarily. I am always eager to read her blog posts and articles in Inside History magazine. I love all that she does for genealogy in Australia, plus she’s a wonderful person too! I was very lucky to meet her at the launch of National Family History Month last year.

Here are the Rules for the “One Lovely Blog Award”:
1.     Thank the person who nominated you and link to that blog
2.     Share Seven things about yourself – refer below
3.     Nominate 15 bloggers you admire (or as many as you can think of!) – also listed  below
4.    Contact your bloggers to let them know that you’ve tagged them for the One Lovely  Blog Award

I have decided to nominate 7. I know quite a few people have been nominated already, so I’d like to spread the love to some others and hope you check out their blogs too. Please do not feel offended if your blog is not on the list – this was just off the top of my head. I love the genea-blogging community!
Posted by Caitie G at 20:55 1 comment:

Amanuensis Monday: The Will of Alexander Mackay

Earlier this month, Find My Past released New South Wales Will Books 1800-1952 (currently offline for improvements). Seeing as my Australian side of the family is from New South Wales (NSW), I had to take a look. Of the 10 I have found so far, I definitely think the most interesting (and most detailed) one belongs to my Great Great Grandfather Alexander Mackay.

Alexander was born in 1856 at Dungog, NSW to parents Donald Mackay and Jane Gilliban Walker. In 1885, he married Elizabeth Lucilla Gill at Nambucca, NSW. After they married, the family relocated to Bowraville where Alexander was a farmer.


Alexander & Elizabeth had 6 children -
Elizabeth died during the birth of their youngest child who was named after her. Because of this, I was curious to see what Alexander's Will would entail and what he would leave to his children. I transcribed it as is and have not added any punctuation to it, other than what was already there. With or without punctuation, it is quite straightforward and easy to understand. Here is the transcription in italics:

THIS IS THE LAST WILL AND TESTAMENT of me ALEXANDER MACKAY (sometimes called Alexander McKay) of Bowraville in the State of New South Wales Farmer I HEREBY REVOKE all former Wills heretofore made by me AND I DECLARE this to be my last Will I APPOINT my son ARCHIE BURTON MCKAY and JAMES ALBERT DYER (hereinafter called my Trustees which expression shall be deemed to include the Trustees or trustee for the time being of this my Will) to be Executors and Trustees of this my Will AND I DECLARE that all trusts power authorities and discretions hereinafter vested in my Trustees be exercised by the survivor of them or other the Trustee or Trustees of this my will I GIVE DEVISE AND BEQUEATH to my daughters EVA DYER LOTTIE MADEL GLYDE ALICE JANE CHURCHILL and ELIZABETH LUSCELLA LUMSDEN share and share alike as tenants in common the proceeds of my life insurance policy or policies and also any money standing at my credit in the Commonwealth Savings Bank I GIVE AND DEVISE to my Trustees two allotments of land in Bowraville and the house standing on one of the said allotments IN TRUST to sell the same and to divide the proceeds between my said four daughters share and share alike I GIVE AND DEVISE to my son ARCHIE BURTON MCKAY all my other property including my other real property upon condition that the said Archie Burton McKay pay each of my four said daughters the sum of Two hundred pounds (£200) each within twelve months after my death and I charge the said real property hereinbefore devised to the said Archie Burton McKay with the payment of the said legacies I GIVE AND BEQUEATH to the said Archie Burton McKay my shares in the Bowraville Co-Operative Society Limited and in the Coastal Farmers Society AND I DECLARE that the share of the said Archie Burton McKay shall bear the costs of my funeral and testamentary expenses duties and fees and the payment of my debts including the mortgage debt on any property devised to the said Archie Burton McKay to the intent that the bequests that I have made to my said daughters shall be exonerated from payment of any part of the said expenses duties fees debts and mortgage debts AND I DECLARE that if any child or children of mine predecease me leaving a child or children surviving them such last mentioned child or children shall take (and if more than one then equally between them) the share which his or her or their parent would have taken under this my will had such child of mine survived me IN WITNESS WHEREOF I have hereunto set my hand this Ninth day of July One thousand nine hundred and thirty-six.

ALEXANDER MACKAY.
SIGNED by the Testator as and for his last will and testament in the presence of us both present at the same time and we at this request in his presence and in the presence of each other have hereunto subscribed our names as witnesses. M. Richardson, Law Clerk Bowraville. L. O’Neal, Solicitor, Bowraville.

23rd February, 1938. PROBATE of the Will was granted to ARCHIE BURTON MCKAY and JAMES ALBERT DYER the Executors named therein. Testator died 1st November, 1937. Estate sworn at £1814.19.7. Nett.
It seems that Alexander really cared for his children, particularly after his wife died and he was left with a newborn and young children. Before my Nanna died, she told me many times that she remembered her Grandfather Alexander Mackay and the Mackay's in general as people who worked hard for their money. She said that Alexander hoped he taught his children that, and Nanna believed that he had.