I’m related to at least 80% of the people buried here. It’s so beautiful. I wish I could have spent longer here, but we only had about an hour. 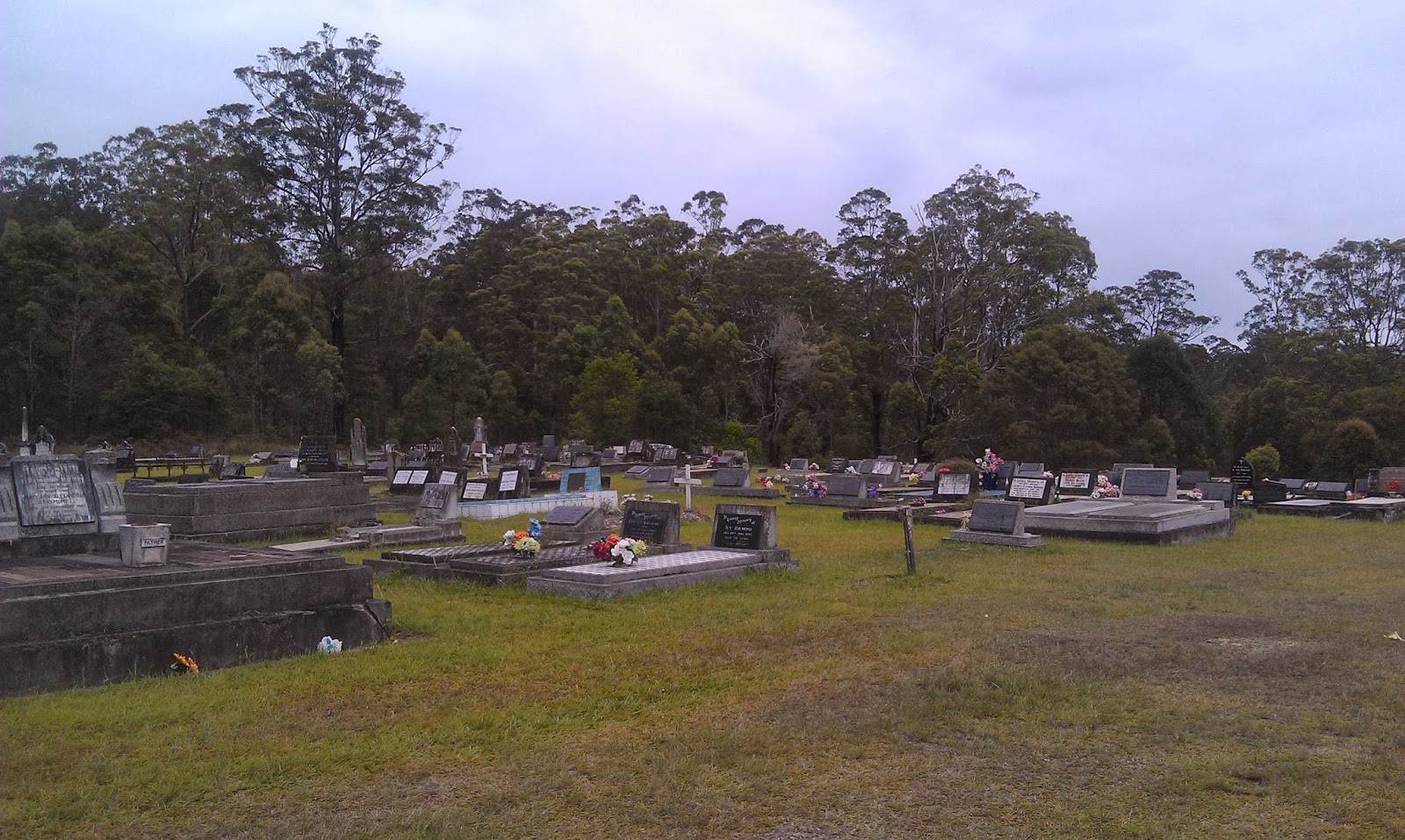 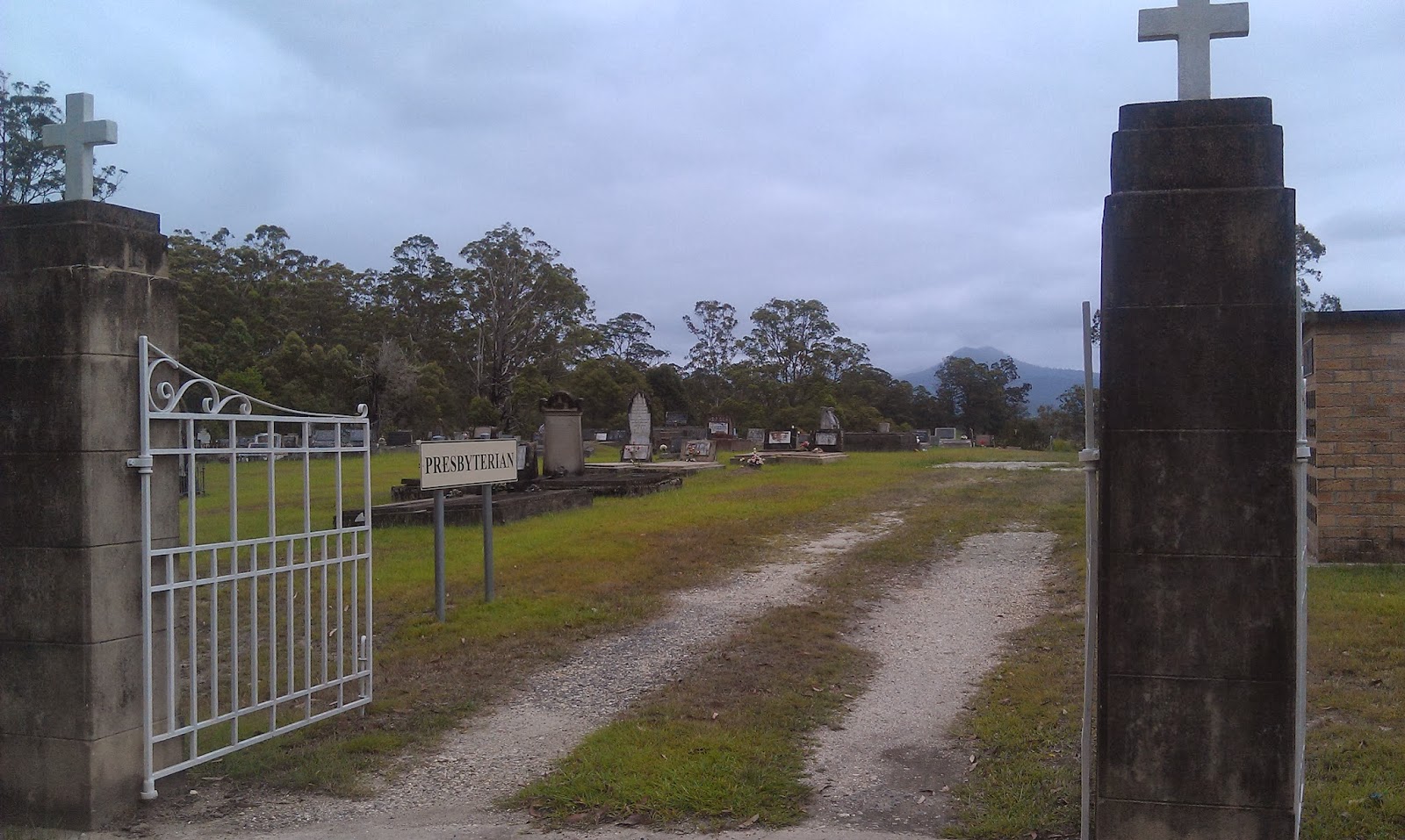 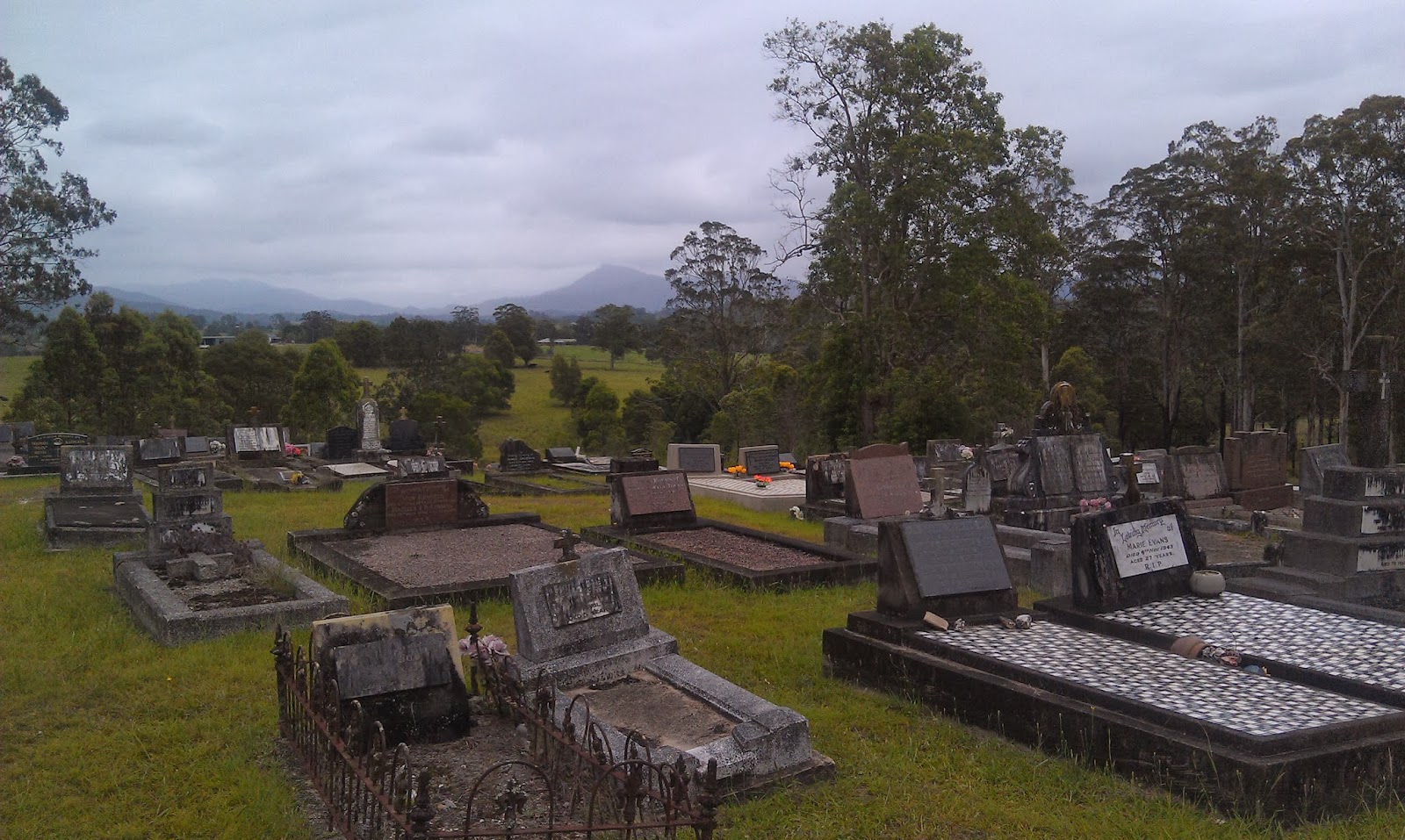 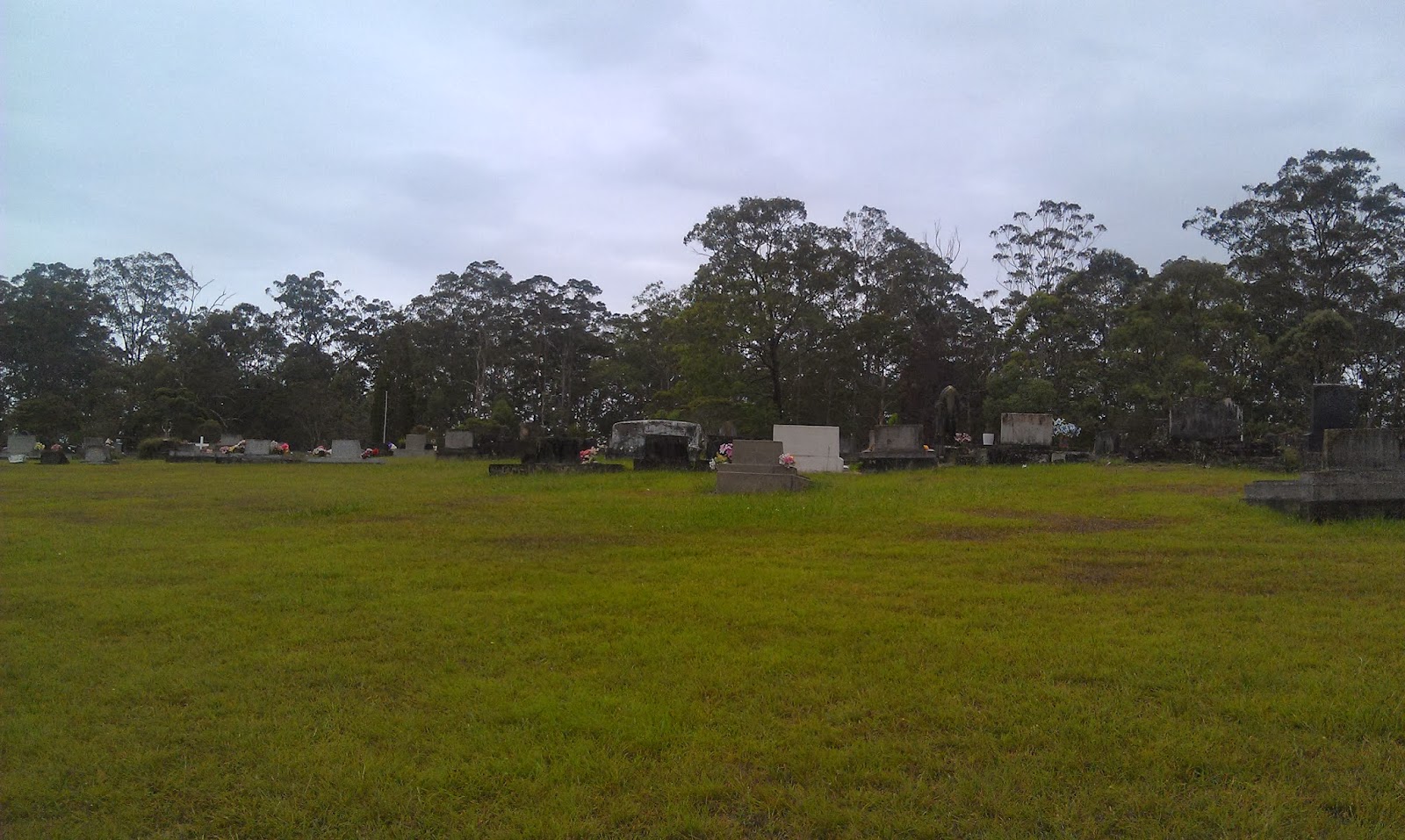 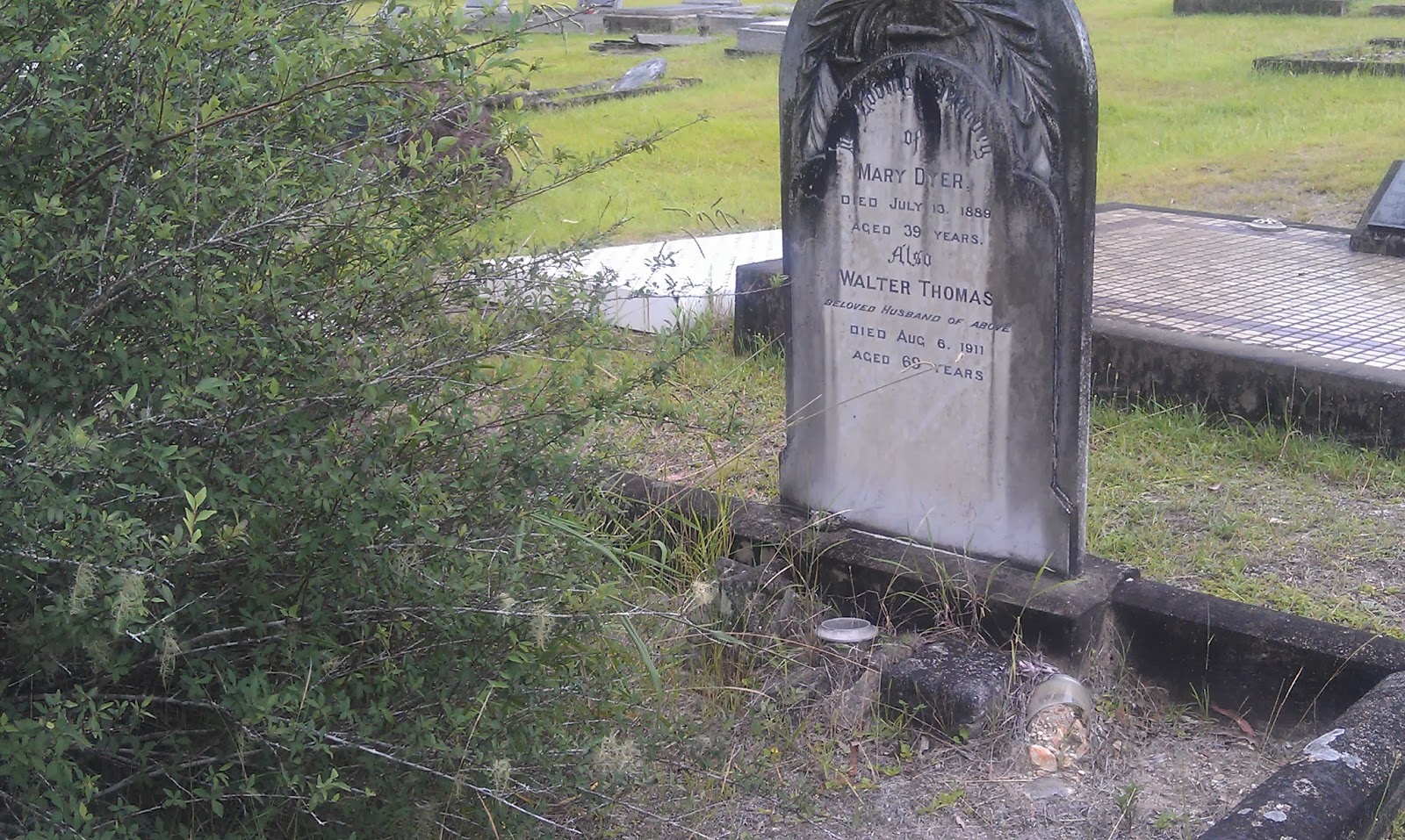 Mary died 2 years after my Great Grandfather James Albert Dyer was born. He was the youngest. He told my Nanna that his 5 older sisters helped his father raise him, along with his 3 older brothers. 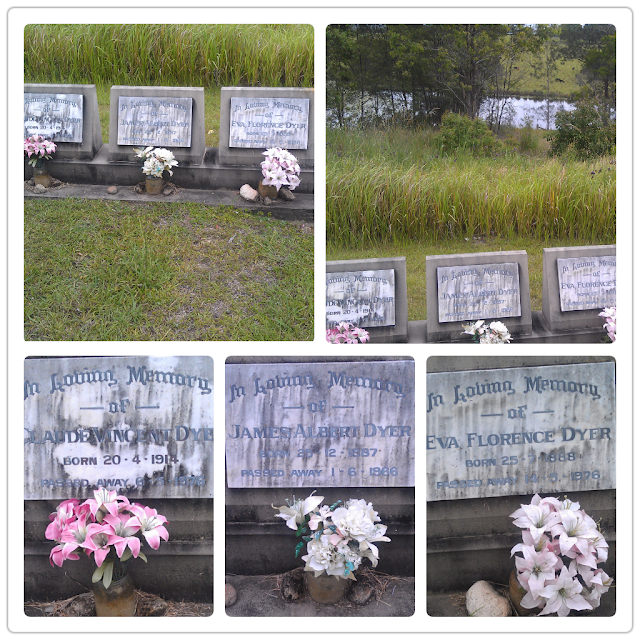 While spending a week at Coffs Harbour, NSW during the holidays, Dad & I took the chance to have a genealogy day. My Nanna grew up in Bowraville, & my Poppa in Macksville - both of which are about 90 minutes away.

First Stop: Nambucca Heads.
My Poppa was a lifesaver at the main beach in the 1930’s. My Dad & Aunty also remember camping & visiting one of Nanna’s Aunts there. The road down to the beach is a very very steep hill. Dad & I walked down it…and then back up!

My Poppa grew up about 10-15 minutes outside of Macksville in Gumma. His father is buried in Macksville Cemetery. Sadly, we didn’t make it to the Cemetery on that day, but it’s in my diary for our next trip. Dad & I drove out to Gumma to see where my Poppa grew up. We couldn’t find the exact place his house & the farm was, but we got pretty close. It was my first time there. I was pretty amazed at how far out it was from Macksville. In the early 1900’s, it would have been quite a journey to get to Macksville. My Poppa went to primary school in Macksville, and also went to school in Nambucca Heads I believe.


One of his longtime school friends, Mary Boulton, donated her house to the Nambucca Shire Council. It wasn't open when we went past, but it's something on the to do list for next time.

This little town, where my Nanna grew up, is about 30 minutes North West of Macksville. In the days of my Grandparents, it would have been much longer. People in Bowraville did not travel far to marry. The same family names keep popping up in my tree. Cousins married cousins, siblings in one family married the siblings in another family. Two of my Nanna’s cousins on her Dad’s side married her Aunt & Uncle on her Mum’s side. You name it - it’s probably in my tree.

Dad & I stopped for lunch at the Coach House Inn, which is in the main street - High Street. Dad kept joking that we had Burgers in Bowraville! Lol. Then it was off to Bowraville Cemetery. I had been wanting to go there ever since I started researching my family tree in 2009. I don't think Dad had ever been there either! It’s a pretty little cemetery. I must say though, that I am related to at least 80% of the people buried there, and perhaps at least 50% of the people who still live in Bowraville.

I finally got to say hello for the first time to many relatives & ancestors, including my Great Grandparents, my Great Uncle, & my two Great Uncles-in-Law. It was amazing! I could have spent all day there.


After that, we drove off to see the property where my Nanna grew up. It’s out the back of Bowraville on a dirt road. What is that road called you ask? Dyers Loop Road. It’s named after my Great Grandfather James Albert Dyer & his family!

We saw the property that my Nanna grew up on. The original house isn’t there anymore - hasn’t been for a long time. It burnt down and the owners rebuilt. What we noticed though, is that it now has a number! It did not have a number in the past. It’s a very cute sign too.

We kept driving for a while, dirt roads and all. We saw a wallaby with a joey, & we almost hit a cow. We eventually ended up in Argent’s Hill! Argent’s Hill is named after the Argent family, and yes, we are connected to them. There is nothing in Argent’s Hill except a house, an old warehouse-community-hall-type-building and an old church. There is a cemetery where more of my ancestors are buried, but we couldn’t find it. I can’t even find it on Google Maps! We turned around and made our way back to Bowraville. Dad was so delighted when the road became sealed again.

After passing through the main drag of Bowraville once more, it was time to start making our way back to Coffs Harbour. But not without a detour - Dad decided that he wanted to go to Bellingen. I’ve always wanted to go there, so, naturally, I agreed. It took about 30-45 minutes to get there. We were only there for about 15 minutes just driving around, but from what we saw, it’s very beautiful and they have done a great job at preserving the history of it. They do have the Bellingen Historical Society after all. Definitely a town I want to go back to & explore.

And with that, the Father & Daughter Genealogy Day came to an end and we headed back to Coffs Harbour with many photos & stories to share.
Posted by Caitie G at 03:57 No comments: