As a result of Scotlands People publishing my article about my Great Great Aunt Jeannie Gow, I’ve received many messages from others asking if their Gow’s are related to my Gow’s. Two people even recognized the handwriting in the photo. The handwriting is that of my second cousin once removed, Betsy, who lives in New Zealand. Betsy is a descendant of my Great Grandfather William’s brother John. I’ve never met Betsy, but she was in close contact with my Grandfather in the 70’s & 80’s. In the late 80’s, they even travelled to Scotland together. They lost contact during the 90’s, and my Grandfather passed away in 2003.

Before I go any further, here’s a quick back story: My Great Grandfather William Gow was the youngest of 5 – John, Robert, Isabella, Jeannie & William. John immigrated to Ireland, Robert & William to Sydney, and the girls remained in Scotland.

When I started delving into the family history a few years ago, my Aunt always said that we must get in contact with Betsy, but we never succeeded in doing so. About 2 years ago, another distant cousin, John, who lives in Canada (also a descendant of John), put me in contact with many descendants of Robert. One of my new found distant cousins, Heather, who also lives in New Zealand, had an address for Betsy. When I solved the mystery of Jeannie, I posted a copy of the documents to Betsy, but never received a response.

Now, a few weeks ago, I had an email from Carole. Carole’s husband is related to Betsy on the non-Gow side. I was so excited!

I learned that Betsy is 85, and living in a nursing home with early stages of dementia. Hence, she hasn’t delved into the family history for a while. Carole took Betsy a copy of my Scotlands People article which she read, and also helped Betsy with establishing where I fit in her family tree. Betsy had only completed up to my Dad. Betsy gave Carole her genealogy folder full of information on our Gow family for her to scan and send to me.

Yesterday, I received a few e-mails from Carole, and it was not at all what I was expecting. The first contained photos of my Great Grandfather William when he was a teenager. These photos I had not seen before, so I was quite excited. However, my excitement shot through the roof when I discovered that Carole had sent me photos of Isabella, Jeannie & Robert too!!! I had never ever ever seen photos of Isabella, Jeannie or Robert before! I was massively happy dancing!! A little later last night, I realized that I now have photos of all 5 siblings!! And of course, I had my own dance party in my room.

I felt like this moment deserved fireworks. Sadly no fireworks could occur in my room for safety reasons.

I shall be posting these new photos over the next couple of days, so do keep your eyes peeled.

And to Carole, all I can say is thank you!

Two weeks ago I posted a map on my Facebook page. This map showed the location of my Grandparent’s house in 1966, when they lived in Anchorage, Alaska, compared to the location of the Latter Day Saints Family History Centre.

It wasn’t until after I had posted it & shown my Mum that I realized I’d gotten it wrong. I had retrieved the Anchorage address off a few old letters written from my Grandma to my Great Grandparents that year. I thought the address said ‘Arctic Circle.’ Nope. It said ‘Arctic Boulevard.’ How my brain decided to read Boulevard as Circle beats me. It was then that I discovered that Arctic Circle & Arctic Boulevard are two very different streets.

I made a mistake. I was wrong, and I’m not afraid to admit it either. It’s easy to make mistakes in genealogy, especially when you’re just starting out. But sometimes, it’s not easy to admit that we were wrong.

I’d been thinking about correcting the map for a few days when on Friday, my partner in blogging Heather, posted something on our Young & Savvy Genealogists blog. The post is titled ‘Learning: How To Be Wrong’ and can be found here. When I saw the title, I thought it couldn’t have come at a more perfect time! Everyone should go read it. It hits the nail on the head. A hole in one really.
Posted by Caitie G at 15:37 No comments:

The Church originally began as a Methodist mission church in 1869 in a building constructed on land on Rush Creek, which was donated by Richard and Susan Gowan nee Peacock.

Richard & Susan Gowan were my Great Great Great Great Grandparents! They also donated land for White Church Cemetery near by, which is where they are buried.
Posted by Caitie G at 06:16 No comments:

The Steam Ship Waihora. My Great Great Grandfather David Croal committed suicide in 1893 by jumping off this ship.

The Book of Me, Written by You: Week 5

This is my response to Week 5’s prompt ‘Your Childhood Home.’ More details about the prompt can be found on Julie’s blog here.

In my 23 years of existence so far, I have lived in not one, not two, but six houses.

This is a photo of the yellow house, which I have cropped from Google Maps Street View.


House 3 was definitely my childhood home, and I lived there for my entire schooling life. It was a 2 & a half story house. The bottom level was the rumpus room. This had 2 guest bedrooms, and a general entertaining area. The only guests we ever really had were my grandparents from both sides, and family friends from overseas. I do remember having sleepovers with my friends down there though. Other than that, I don’t remember it being used much, and it did get quite dirty. It had this weird linoleum floor too. The rumpus room also led outside to our pool. Gosh, that pool brings back so many memories. I really miss having a pool because it can get so hot in summer here.

The middle floor consisted of the kitchen, living room, bathroom, laundry, and also led onto a small balcony. The kitchen and living room had white walls, but the bench tops and cupboards were brown. I remember a lot of brown, white & this patterned floor below. My mum absolutely hated it.

Actually, now that I think about it, my mum described the brown as ‘mission brown’ which was apparently quite popular in the 70’s & 80’s. In the living room, there was a long wall which had doors that led out onto the balcony. This wall also had black louvers along the bottom. When I was young, I was sitting at a table next to the wall; I fell off the chair and hit my head on the edge of the louvers. I don’t really remember it. I think I went to hospital, but I’m not sure. I do remember wearing something on my head for a couple of day’s though maybe?

Here’s a photo of me in the living room when I was little.

The top floor, the half level, had the lounge room, study, entry way, and three bedrooms – parents, brother’s and mine. The lounge room had white woolly carpet, a very high ceiling, and lights that seemed like the size of planets when I was young. We didn’t really use this room except for special occasions such as Christmas. The study & my brother’s room had white carpet. I’m not too sure what the carpet in my parents’ bedroom was but I think it was a mixture of white and brown.

What color carpet did I have in my room? GREEN. GREEN GREEN GREEN. You know, the colour of grass. I loved my room, and I went through many phases with different posters and whatnot.

When I was 3 or 4, I was still wearing nappies sometimes for reasons I don’t remember. What I do remember though, is mum opening the closet and pulling the nappy out. I was all ready to plonk my naked butt down on that nappy when mum folded it out…there was a giant Daddy Long Legs spider just chillin’ in the nappy. Thankfully I did not plonk my naked butt down on the spider. That would have been fun.

I would post photos of the house, but I don’t have any on my computer. They’re all in boxes with the rest of mums photos.

Towards the end of 2005, our house was starting to get quite old, and the balcony was not safe anymore. My parents began consulting with builders because they wanted to demolish & have a new house built. At the end of 2007, on my second last day of high school, we moved to our first rental house (House 4) which was on the other side of the suburb. Our house was demolished at the end of 2007, or early 2008. I don’t remember exactly. At the beginning of 2010, we moved to our second rental property, House 5, which was on the same road as House 4, just further up. Construction of our house began sometime in 2009, and was finished at the end of 2010. Here’s a picture of it during the construction process.


Our original house was situated on two blocks of land. When we rebuilt, we built on one side, and sold the land on the other. At the end of 2010, our house was finally finished, and we moved in. So yes, House 6 is where House 3 was.

I still live at home with my parents. Most kids in Australia don’t usually move out until they have finished Uni, or close to it. I’d like to move out next year or in 2015 at the latest, but we’ll see what happens.

To finish, I’d like to leave you with the image of our house on Google Maps Street View. When did Google Maps decide to take this photo? Not before our house was demolished, not after our house was finished being built, but at the beginning of the building process. I think Google might need to do some updating…

Email ThisBlogThis!Share to TwitterShare to FacebookShare to Pinterest
Labels: ancestry, anglers rest, blogging prompt, geneabloggers, genealogy, home, the book of me written by you

The Funeral Notices for Margaret Dalgleish nee Learmond. She was my boyfriend’s Great Great Grandmother. 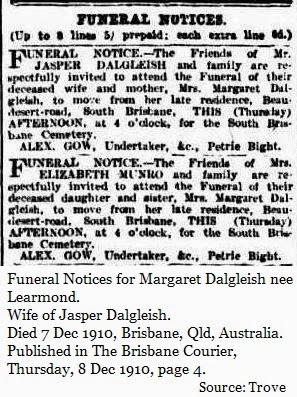 She was born in about 1860 in Roxburgh, Scotland to parents George Learmond & Elizabeth Brock. In 1879, she married Jasper Dalgleish, also in Roxburgh. They arrived in Brisbane on September 14th, 1883 after travelling on the ship Nowshera. They had 11 children together. Margaret died on 7 December, 1910. She is buried in South Brisbane Cemetery with her son John Francis Dalgleish, my boyfriend’s Great Grandfather. Her husband Jasper died in 1942. His grave is unmarked, but he is either buried with her, or next to her.

South Brisbane Cemetery is actually within walking distance of where I live. I went there for the first time a few weeks ago for a Ghost Tour. I definitely plan on going again soon to check out all of my boyfriend’s ancestors’ graves.
Posted by Caitie G at 05:33 No comments:

Convict ancestors, you just gotta love them.
Posted by Caitie G at 03:15 No comments: